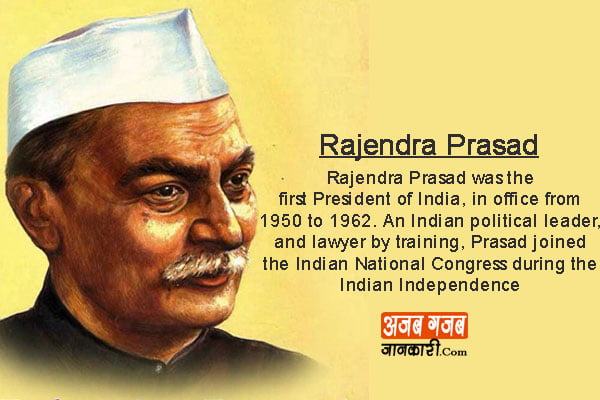 Dr Rajendra Prasad Biography in hindi Rajendra Prasad was the first President of the Republic of India. The spirit of simplicity, sacrifice, service and patriotism was filled in them. Rajendra Prasad devoted his entire life to the freedom movement. He was a very simple natured person who had very common dealings with all classes of people.

Dr. Prasad was born on December 3, 1884 in Jiradei, a small village in Bihar. His ancestors had settled first in Ballia and then later on Jiradei of Saran (Bihar) from a place named Amodha in the United Provinces. Your father Mahadev Sahay had three daughters and two sons, of whom Rajendra Prasad was the youngest. His father was a scholar of Persian and Sanskrit languages. Whereas his mother Kamleshwari Devi was a religious woman. Rajendra Prasad was handed over to him at the age of only 5, according to the customs of his society, to a Maulvi who taught him the Persian language.

Rajendra Prasad’s early education took place in his village Jiradei. From childhood, he was interested in studies. In 1896, when he was in the fifth standard, at the age of 12, he was married to Rajvanshi Devi. For further studies, he applied to the University of Calcutta, where he got admitted and started getting a scholarship of 30 rupees a month. For the first time a young man from his village had succeeded in getting admission in Calcutta University. So it is natural that it was a matter of pride for Rajendra Prasad and his family.

After this, Rajendra Prasad joined the Calcutta Presidency College in 1902. He completed his master’s degree in law in 1915 for which he was awarded the Gold Medal. After this he also obtained a doctorate degree in law. After this he came to Patna and started advocating due to which he got both wealth and fame in abundance.

In Bihar, the British government had indigo fields, the government did not give proper wages to its laborers. In 1917, Gandhiji came to Bihar and took the initiative to overcome this problem. During that time Dr. Prasad met Gandhiji and his ideology was influenced. In 1919, there was a wave of civil movement all over India. Gandhiji appealed to boycott all schools, government offices. After which Dr. Prasad left his job.

Rajendra Prasad became a loyal companion of Gandhiji during the Champaran movement. After coming under the influence of Gandhiji, he renounced his old and orthodox ideology and participated in the freedom movement with a new energy. In 1931, the Congress started the movement. During this, Dr. Prasad had to go to jail several times. In 1934, he was made the President of Bombay Congress. He was made president more than once. Participated in Quit India Movement in 1942. During this he was arrested and kept under observation.

Even though India gained independence on August 15, 1947, the Constituent Assembly was formed shortly before that, with Dr. Prasad elected as its president. Dr. Prasad recognized it by signing the constitution.

The Republic of India got its first President on 26 January 1950 in the form of Dr. Rajendra Prasad. After that he remained the President till 1962. After this he voluntarily left his post in 1962 and went to Patna and started living life by doing public service.

Dr. Prasad died on 28 February 1963. There are many such incidents related to his life which prove that Rajendra Prasad was a very kind and pure person. His image in Indian political history is that of a great and humble President.

During the days of political activism from 1921 to 1946, Rajendra Prasad lived in the Bihar Vidyapeeth building in Patna. Posthumously it was made ‘Rajendra Prasad Museum’.